The complete game, also known as the Full Moon Edition, sold for 2,500 yen. Contained the "Far Side of the Moon" routes (Akiha, Hisui and Kohaku). First released in 2000 during C59, more were made available in 2001.

Tsukihime is one of the most successful doujinshi work of its time, and stands alongside Higurashi no Naku Koro ni and Touhou Project as one of the three miracles of doujinshi (here doujinshi refers to non-commercialized or self-published work, as opposed to derivative of other works).

The game captured its audience through the story's numerous twists and drama, the large number of likable female casts, as well as the rich world and music. In January 2001, a fan disc called PLUS-DISC was also released. Due to the original game's popularity, TYPE-MOON released a fan disc in August of 2001 called Kagetsu Tohya to further flesh out the game world's setting. In 2003, an anime adaptation titled Shingetsutan Tsukihime began airing. The quality of the anime was deemed to be extremely poor, however, and was overall considered to be a failure. When TYPE-MOON transitioned into a company in 2003, it packaged the original game, Kagetsu Tohya, and PLUS-DISC into a bundle called Tsuki-Bako, and released the collection to signal of the end of TYPE-MOON as a doujinshi group.

Tsukihime's success helped cement TYPE-MOON's popularity among fans and gave the group the resource it needed to become a company and develop Fate/stay night. Currently, copies of the game and its fan discs are almost impossible to find, and are usually found on auction websites for extremely high prices.

In April 2008, TYPE-MOON announced a remake of Tsukihime, featuring new artwork and a new Satsuki route. Little information on the remake has been release since. 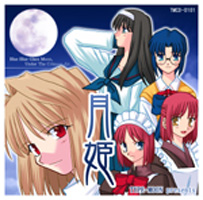