Published on CloseUp NetTube in March 2008

Shortly after the premier of Kara no Kyoukai - the Garden of sinners Chapter 3 in Japanese theaters in early 2008, CloseUP WebMovies hosted an interview with ufotable's Terao Yuichi, who has been in charge of ufotable's Photography Department since Gakuen Utopia Manabi Straight! in 2007, and worked on the 7-part animated film adaptation of Kara no Kyoukai.

--"Director of Photography" is a title that reminds people of a movie industry job title, it's hard to understand the responsibilities of this job in the anime industry. Can you give us some details regarding what this job is about, Terao Yuichi-san? 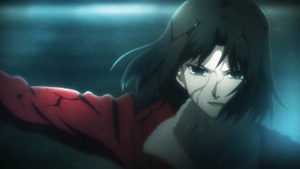 Terao: The work involves things like choosing different depictions of light to avoid making the skin look too monochromatic, projecting backgrounds and reflections on the surface of a spinning round object, and the refraction on water surface, things that require careful calculation.
As for animation, background artworks and original art assets are first produced, then the things that are hard to express using words, such as natural reflections of light, need to be added to those artworks in a natural way, and presented through the atmosphere of Kara no Kyoukai.
To put it in a way easier to understand, think of all the things that need to be distorted in the raining scene where Fujino yells "Bend!" The rain in this chapter gives off a negative feeling, unlike the rain in Chapter 2, this rain is affected by the strong wind, and is in a foggy state rather than droplets, things like these are very interesting.

--From the way you describe it, it sounds like very hard work.

Terao: Even though in the beginning you may subconsciously think this job is "really great!" or "really cool!", once you are immersed in it, you will really think it's a great job.
In the Chapter 3 booklet, pay attention to Cut No. 404, the way the rain drops fall on objects, the direction the wind is blowing, and different camera angles that affect the way the street lights are projected, a lot of information were put into this scene. It's very hard to explain, but after it was completed, the scene had a brilliant atmosphere to it.

--Are photographers promoted from artists?

Terao: Photography is photography, it's an independent job. I feel a photographer is a mix between make-up artists, stage organizers, and lighting staff. For example, when a character is walking from here to somewhere far away, the further the character is from the light source, the weaker the light, you can't just have lights simply shone overhead, you also need to take into account the amount of light reflected from the couch area, and the surrounding colors, all of these need to be considered.

--Hearing you describe it, it seems like the atmosphere in Kara no Kyoukai is built on top of calculations, that's really something, it feels like logical analysis from science and engineering.

Terao: I come from a liberal arts background, but a large part of photography does rely on science, so I need to work while keeping a balance between the two. Actually, only the simulation and photo capture require prior calculation, what comes later mostly depends on the ability to see the beauty of the scenery outside of those calculations.

--Where did you practice these skills?

Terao: It's mainly my own experience, whenever I see a beautiful scenery I save it into my head for when I need it. For example, one morning while I was riding my bike, I saw a ray of light shining through the fog, later I ended up using it in Chapter 2 in the scene where moonlight is shining through the bamboo forest.
While on the topic of that scene, during a previous roundtable, Ms. Eris mentioned a "red light," that was my mistake, there was no special intention in putting that in there, "Ah, it got in by accident..." (laughs).
The mistake was caused by accidentally mixing in something that was oscillating, even though it couldn't be explained, it looked really cool, so there was surprisingly little reaction from others, and it wasn't noticed until a month later during the roundtable when it was discovered by Ms. Eris (laughs).
In cooler colored scenes, even though we forcibly mixed in some orange for balance, in the beginning that only happened by chance, caused by the need to process a large amount of information.

--Chapter 3 contains some gorgeous battle scenes, do you like it?

Terao: Of course I like it. In the scene where Fujino bends objects in the rain and causes the space to distort, we intentionally added the effect of rain droplets being reflected off. Maybe people weren't able to understand it fully while watching in the theater, but rain drops were being bounced off left and right around the area of the distortion. It's okay even if the audience didn't notice these things, as long as they thought this section was impressive and daring.
This part wasn't dictated by the storyboard, but was accomplished through the photography director's own interest. We processed the shade and the transmittance of the skin, the backlight on the office window, and lighting on the skin all according to my own interest.

--This time the blood was also well presented, the scene where Fujino walks through blood in the warehouse is really beautiful.

Terao: I even thought of cutting open my own finger to make some actual observation (laughs). The blood here is the result of drawing, with texture done through digital processing. Some of the blood in Chapter 1 was done completely through digital means, but it doesn't matter if it's done digitally or through drawing, its features need to match real blood naturally.

--The girls in Kara no Kyoukai are also beautifully presented.

Terao: There are long haired girls in both Chapter 1 and 3, to present the different levels of long hair, I kept thinking about how to best showcase the beauty of Asian females (laughs), and ended up using highlights while the character is moving to showcase the hair's moving luster.

--The pattern on the cafe wall was also done by you? Were there any changes when you mixed in photos? 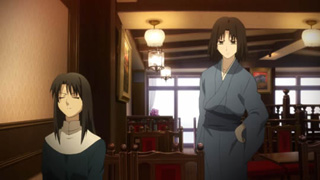 Terao: That scene was mostly made using photos, but the wallpaper and illumination were modified. Although the chair was based on real models, but Ahnenerbe (the name of the cafe in Kara no Kyoukai, also appears in Nasu's other works such as Fate) itself received many modifications.

--Which part did you feel was the hardest?

Terao: The rain. Simply because of the large size of the drawing, and the high resolution of the movie theater screen, although there was time for rendering, it would never finish (usually rendering using computer takes time, the time it takes to render depends on the scene's complexity). Even though the preview was due the next day, here we were still trying to finish, while at it we even made a mistake and had to redo everything, we were basically in a "there's no way" state (laughs).

--In other words, you were working nonstop until the day before yesterday (laughs).

Terao: When you don't know the exact time your assignment is due, you'll feel you need to do extra work for every single part of the project. So we first finished the low level tasks, taking on tasks after task, and finishing everything in one go. If more work needed to be done, we would treasure the time spent traveling home (letting the computer run during that time), even when we were going up and down the stairs, the computers were running to finish tasks (laughs).

--(Laughs) were there any part here that needed extra attention?

Terao: Extra attention was placed on the glossiness of the knife. Normally during animation, glossy effects were only added to a blade during climatic parts. Adding these effects that produce light on the metal really does take a lot of effort, but it would be too embarrassing to first show a high impact luster, only to go back looking like a plain feather in the next scene, so we ended up doing it for every scene.

--During the battle between Shiki and Kirie in Chapter 1, the moment Shiki held the knife horizontally, you can see the surroundings being reflected on one side of the blade, also the surroundings that were reflected on the surface when Mikiya poured the coffee, can you talk about these a little bit?

Terao: When researching angles and positions, these materials are the first things you need to look at (things that reflect light). Also, I drink coffee every day, sometimes I think to myself why not just take a few pictures (laughs).
People who notice these things really do exist, so it would be bad if they notice any problems. I would feel very lucky if the audience can notice these things during their first viewing and inadvertently let out an "ah!", and on the second viewing be able to appreciate these little details.

--Looks like photography is a job that is very hard for people to evaluate, there's a feeling of "you lose if people notice it."

Terao: Yes, yes, no evaluation from the audience is the best evaluation.

--Still, don't you feel any sadness seeing others unable to assess your work?

Terao: I think there are all kinds of people in this world, for someone like myself, I am satisfied as long as the people I work with understand what I do. Nonetheless, seeing a movie beautifully done because of my hard work makes me very really happy, it's really great I am able to work together with the team to contribute to the anime.

--Thank you very much for today's interview.