Fate/Zero Exchange of Questions and Answers 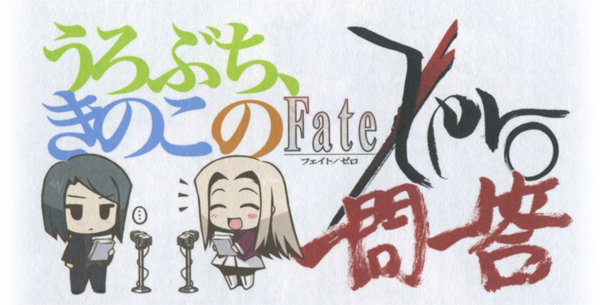 This is an interview with Nasu and Urobuchi found in ALL OVER/Zero, a bonus booklet that came with the purchase of Fate/Zero volume 4 during Comiket 73 (2007 December).

There are 20 questions total, while some of them answers some questions about the story and the settings, a majority are jokes and references to other works.

Questions 1: Saber and Irisviel seem to have established a great Master-Servant relationship, and it seems those two have not eaten together? [ Taitō · Yurianna LUV-san ]

Questions 2: What's the limit of Berserker's ability to "turn any object into Noble Phantasm"? Will it work on a battleship? Why not just hijack a computer and become an existence like Sky*et... please put a stop to my overflowing dreams. [ Kyoto · Musashibō-san ]

Questions 3: Please tell me who would win in a "no-skirt" competition between Iskandar and Caren? [ Chiyoda · Clerk of a certain large bookstore ]

Questions 4: Out of the Hundred-Faced Assassins, which Hassan left the deepest impression on you? [ Mie Prefecture · Modern Ninjutsu Study Group member ]

Questions 5: Even though Kotomine parried Contender's bullet with his inner force, is his Ba Ji Quan really that strong? I'm very interested in this, please tell me. [ Taitō · Bazett☆Tan ]

Questions 6: In the end did Father Mite repent? Also, my Gin-Pika seems functionally different from the Gin-Pika here, can I return it? [ Taitō · Fuyuki's Holy Virgin ]

Questions 7: ...hey hey, are we missing a page here? What happened to the most important character? [ Fuyuki · Fuyuki's Tiger (Current) ]

Questions 8: Recently Hollywood has been using F-22, if Hollywood offered that to you, would you still use F-15? Or would you rather use Itano Circus? [ Taitō · Korokazu ]

Questions 9: Why is my luck stat curiously low... it seems even lower than when I fell to the dark side 10 years later. What kind of curse is this? [ Fuyuki · King of Knights ]

Questions 10: I'm currently playing this game called Romance of the Three Kingdoms VIII, is there any way to get rid of this Social Interactions and Relationships system? Just because I pillaged a little bit and executed a person I didn't like, now no one wants to join me, no one wants to talk to me, and Sun Shangxiang won't even marry me. This is so weird! How can I conquer like this? Are all Chinese people this narrow-minded? [ Fuyuki · King of Conquerors ]

Questions 11: It's a bit sudden, but can we please discuss this. I'm currently dying in a back alley, and suddenly this weird cane calling itself Kaleido Stick appears and says something like "make a contract with me, if we make this contract, not only will you not die, but some eggplant or mushroom guy will even make a game where I'm the main character." What should I do? Should I make the contract? [ Fuyuki · Kotone ]

Questions 12: Diarmuid tastes so good. [ Causal horizon · All the evil of the world ]

Questions 13: ...Is it a tradition that the Saber class is always beaten by the Lancer class at the start of the story? [ Wales · Pig of Cornwall ]

Questions 14: Is the reason Lancer didn't bring Moralltach and Beagalltach this time also because he (Kayneth) didn't listen to his wife? Would Beagalltach even be of use this time? [ Ireland · Pig of Ben Bulben ]

Questions 15: Aaaand on the subject of Berserker, you three got along, with no one ever screaming at the others to do something? [ Massachusetts · Written as the moon-killing Char's Zaku (Because it's red) ]

Questions 16: The middle-aged man of Fuyuki, Kiritsugu, holds two powers. One of them is the Command Seal, the power to give absolute command to the strongest Servant. The other power is the Contender. With magical bullets that have the power to destroy a mage's magic circuit, carrying with him the nickname "Magus Killer," Kiritsugu began making his move. To obtain the Holy Grail, and to create a peaceful world where everyone can live in happiness. [ Area 11 · Pizza Hut regular ]

Questions 18: In the 3rd volume, I became moe for Sola-Ui after she experiences the joy of first love. A page later she got her arm cut off. In Zero's world, is there a law that states "Feeling happiness is a precursor to BAD END"? [ Mifune City · Servant Yandere's Glasses ]

Questions 19: My family is a drapery wholesaler, if I looked around our warehouse, will be able to find a magic book like the Kiryū boy? If possible I'd like it to be a Japanese Servant. [ Fuyuki · Kaede Makidera ]

Questions 20: What's Urobuchi's favorite scene? Also, if it exists, please tell us about something you didn't finish. [ Taitō · Mountain of Mash Tree ]

Fish and chips
Looks like he forgot fish and chips didn't exist around the time of King Arthur.

Sky*et
Refers to Skynet from the Terminator series, a fictional artificial intelligence system that becomes self-aware and decides to terminate humanity.

バゼット☆鍛
Bazett☆Tan, comes from Fate/tiger colosseum, where fans referred to Bazett as "破壊天使バゼットたん" (Angel of destruction Bazett-tan), which resulted in a barrage of videos on Nico Nico Douga, one of which decreed that "Xたん O鍛" (both are pronounced "tan," but 鍛 can also mean "forged"). Here it is unknown whether Nasu used this name because he saw the Nico video...

Killer of Saibane Fist
Saibane Fist (サイバネ拳法) is a term from Urobuchi/Nitro+'s Kikokugai. An "external" style where a person whose body has been partially replaced by robotic parts attain strengths impossible for normal humans. Killer of Saibane Fist (サイバネ 拳法殺し) is likely referring to how Kotomine's style is similar to Shidenshō (紫電掌), another Kikokugai technique where the user injects strong electromagnetic pulse into the opponent's body, destroying the eletronics of the mechanized body parts, similar to how Kiritsugu's Origin Bullets can destroy a mage's magic circuits. For Saibane Fist users it's a one-hit killing blow.

Supersonic 6 Hit Fist
Likely another reference to Kikokugai (as is with most of Uro-related responses). Probably referring to 六塵散魂無縫剣, a supersonic sword technique of Kikokugai's protagonist that is so fast it can cut down bullets fired from a machine gun.

Gin-Pika
Or "Golden Flash," a nickname given by Rin to Gilgamesh due to his flashy golden armor.

Itano Circus
Named after anime director Itano Ichirô, and primarily comes from the anime Macross, in which Itano created an attack where a ridiculously large number of missiles are launched at a target. It's usually characterized by the missiles' twisting, turning and crisscrossing contrails. Watch this video to get a better idea.

Kaleido Stick
A sentient wand wand that appeared in Fate/hollow atarxia, responsible for transforming Rin into a magical girl.

Harsher than any words
A play on words. "千の言葉より残酷なルビーちゃんという説得力......！" is a reference to a fashion magazine ad.

Demonbane
This time our guest is Another Blood from Kishin Hishou Demonbane, a girl who despises her mother and loves her father. The "you three got along" thing is her quote from the fighting game Nitro Royale: Heroines Duel when she beats Saber.

Char's Zaku
Possibly referring to Char Aznable's Zaku unit from the Mobile Suit Gundam series, and its similarity to the robot she pilots?

Yangire
A term that refers to characters who snap suddenly out of jealousy, irritation or something similar.

A blood stained Iri
This question is a big parody of Code Geass... "The young man from Britannia, Lelouche holds two powers. One of them is Geass, the power to give absolute command to his opponent. The other power is the Black Knights [...] carrying with him the name "Zero" [...] create a peaceful world where his sister can live in happiness." The bloody Iri joke is a reference to the events of Code Geass episode 22.

観布子市・ヤンデレ使いのメガネ
観布子市 (Mifune City), located in Tokyo, is the city where the events of Kara no Kyoukai take place, ヤンデレ使いのメガネ is probably referring to Mikiya.