An one-on-one interview from the 2012 April issue of Comptiq with Aoki Ei, Director of the Fate/Zero anime, who talks about the upcoming season 2 of Fate/Zero.

--It seems recently you've been interviewed by all kinds of media about Fate/Zero.

Aoki: Thanks everyone for once again making me feel the enormous influence of the "Fate" franchise. What surprised me was that even my mother was watching Fate/Zero (laughs). She seems to enjoy it, even the re-runs, I was really surprised.

Aoki: She seems to have watched some Mobile Suit Gundam, but usually she doesn't watch many anime. Even though she doesn't know about some of the more detailed parts, she still understands the relationship between the casts, such as who is against who and whatnot.

--Did you direct it with "can be enjoyed even without the grand backdrop" as your goal?

Aoki: To tell you the truth, while I did know what Fate/stay night was, I didn't have a good understanding of it when I read Fate/Zero. I think reading the story under such circumstances, rather than say I understood it, it was more like the author made the need to understand it irrelevant. So I directed the anime with the idea of "since I can get it, the audience should be able to get it as well" in mind. I didn't place too much effort on explaining these things. I think this is the result of Urobuchi-sensei's excellent writing skills.

--Ah I see. It seems Fate/Zero has become popular not only among TYPE-MOON fans or anime fans, but a much larger audience.

Aoki: Now that you mention it, back in January when we were making the storyboard in a restaurant, a stranger came up and said "it was a blast watching Fate/Zero" (laughs). That person seemed to be someone in the music department, so it seems different types of people were able to enjoy our anime. It made me very happy.

--With such huge expectations, do you feel any pressure?

Aoki: You'll feel pressure no matter what you work on, so it's not like we're feeling a lot of pressure just because it's Fate/Zero. It's the normal amount of stress. But as the date of airing gets closer, the airing date becomes really annoying. You feel distraught all day, and can get anything done. There were screening events with the first season as well, so we had to prepare a lot, those days were hell.

--You even used Twitter when you worked on Wandering Son.

Aoki: Yup. I really felt distraught. When making Fate/Zero I figured I'll stop writing on Twitter. While working on Wandering Son, even though I thought I'd update Twitter casually, thinking about it now it was really stressful. I think I'll go back to Twitter after a while when things calm down.

--What's the progress of the production?

Aoki: En... we can finally take a sigh of relief now that we're at the final episode. Even though we have just gone into the actual production stage, the preparation stage is finally over. During the first season, the delay of the storyboard caused a lot of problems during production. This time around we finished the storyboard early, so I feel relieved as a director. I'm very happy now that I can focus all my attention on the production work.

--We are getting close to the climax, remarkable and dazzling scenes will come one after another.

Aoki: There are a lot more compared to the first season, thinking about it now it's really scary (laughs).

--What's the overall feeling of the second season?

Aoki: Even though Fate/Zero begin with a large cast, each character will receive his or her ending soon, and in the end the plot will meet up with the story of Fate/stay night. The plot will move toward Kiritsugu's ending, I hope everyone will like it. The first season didn't focus too much on Kiritsugu. His character's sudden highlight will also be something to watch out for.

--In contrast, other characters will slowly make their exit.

Aoki: Of course each one will take turns exiting the stage. Regarding their exits, even though there are some who can't make a dramatic exit no matter what, each CV did their best giving voice to their respective character, filling each one with great emotions.

--Beginning with the Drama CD, this will be the last chance to perform, there must be a lot of enthusiasm in their performance. A lot of effort must have also been put into the animation to fully showcase your strength.

Aoki: Correct. Characters are all made up, so it's not like anyone will die in reality, when a CV's character dies, it's not like that CV will disappear. But as a producer, one must understand the importance of a character's demise, that they shouldn't be killed off carelessly. I hope they can all make their exit in a splendid fashion, leaving a lasting impression in the audience. With this in mind, we really did give our best.

--Characters in your work really have memorable exits that leave an impression on the audience. It was the same in Ga-Rei: Zero, the characters' demises were really memorable. Fate/Zero should have many grand scenes as well right, I'm really excited. Are there any changes in the flavor second season's performance?

Aoki: It's mostly the same, following the flow of the first season, with improved attention to detail.

Aoki: To prevent "let's just leave the TV version as is..." due to delay in storyboard from happening. Even though we paid attention to this in the first season, in the end we still had to re-do several parts. We'll do better for the second season.

--Speaking of which, the second season begins with the battle with the sea monster, that must really be something.

Aoki: In the battle with Caster's sea monsters, Saber will finally be able to show her skills.

--In the first season her battle was interrupted, and she was even bullied during the meeting of the three kings, is it finally time for her to shine!

--Since it's the sea monster battle, the fighter jet is also something to look forward to.

Aoki: The fighter jet, as well as "that," which I'm sure those who have read the original novel will understand, will be made with 3DCG, the effect will be really good.

--What will happen after the battle with the sea monster?

Aoki: Going back to the Grail War, Master's and Servant's showdown one after another. In the later stage, it'll feel like multiple characters may make their exit in just one episode. In this sense each and every episode will be worth watching.

--What do you care about the most during this period?

Aoki: Probably Kiritsugu's past. How did Kiritsugu turn out the way he is, in the original novel it was covered separately from the main story, this will need to be presented well in the anime. It will also expand and complete some missing information base on the original novel.

--In this case the number of Kiritsugu's fans will surely increase by a lot.

--Even though it feels like he already has quite a lot of fans, in the first season it felt like Kiritsugu's activities were restricted. After working on Fate/Zero for so long, do you feel as a director that your style and way of directing has changed?

Aoki: Yeah... even though I don't feel any change myself, maybe it's not as flashy as before. I think some of my work in the past had that "look what I can do!" feel.

--It's like branding the work with "this is my show!"

Aoki: Right, even though I've had the feeling of "leaving my mark," that feeling is now gone. It's important to shine, but if you are too flashy, it may destroy the work. Whether focusing on certain parts and giving attention to them is good for a work or not, is another story.

I probably shouldn't say too much about it, but I feel it's not good that directors and other elements receive more attention than the title itself. I want the show to receive the most attention. If there is an interview I will attend, since you can be really grateful during an interview, but it's not good that the director is receiving more attention than the title. I often think that a producer should be someone from behind the scenes who doesn't come out into the spotlight. With everyone thinking Fate/Zero is a fun show, and receiving praise from the producers... recently I feel this is what really makes me happy.

--"Aoki Ei the Performer," who once made the highly talked about "Empty Pot Stirring" of Shuffle! episode 19 (a creepy scene where Kaede, who is becoming mentally unstable, stirs an empty pot), is no longer here?

Aoki: Regarding that, rather than say I was trying to grab attention, it was more out of a necessity to follow the script, where I though "wouldn't it be better to do it this way," and so I ended up trying it out. So about that... if required, I'll do it again (laughs).

Aoki: Yes, but Fate/Zero doesn't feel like that type of show. Rather than giving specific parts the spotlight, the balance of the whole is more important. "Everyone work hard to successfully create a Fate/Zero for everyone. What can you do by yourself?" I worked with that kind of feeling in mind.

--Please say something to the fans.

Aoki: The second season is about to begin. Due to time constraints, I can't explain it clearly to everyone, but please review the first season Blu-ray Disc before watching the second season. 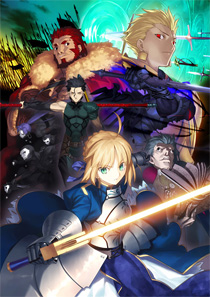 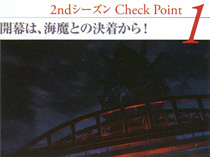 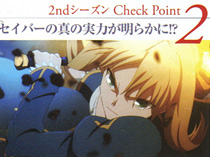 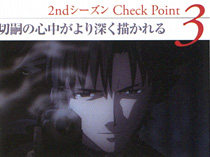 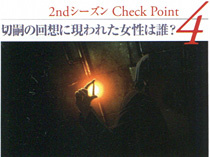